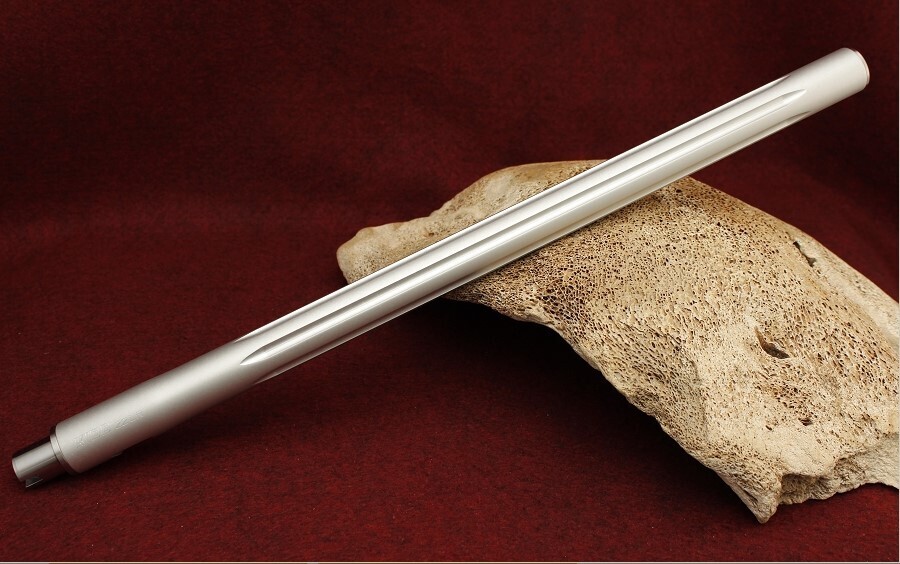 Another superb aftermarket barrel for the .22LR by Kidd Innovative Design. This Ultra Lightweight Fluted Bull Barrel weighs just over a pound and yet is a great shooter! We have seen a niche in our barrel market for a much lighter weight barrel and believe our customers will benefit from our durable steel barrel anchored by a stainless steel breech and stainless steel muzzle design. As with all our barrels the bore is hand lapped here at KIDD.

This will be great for people who don't want to tote around a heavy rifle but still want a high quality product. At 1.25 pounds and 16 1/4 inches in length this is our lightest rifle barrel. Our product testing has resulted in 1/2" groups at 50 yards. Though, we don't guarantee this barrel to group at that rate. A threaded muzzle is an option on the barrel and our threading is 1/2"-28 and is available with a protective cap.

For those customers that would like our threaded and caped version the length will increase just slightly to 16 3/4" and our ultra lightweight barrel with our aluminum muzzle brake will be 18 1/4" in overall length. This aftermarket 10/22 ® barrel will drop into any bull barrel channel rifle stock and will look like it was custom made for it.
Avoiding "barrel droop":
First and foremost barrel droop is eliminated with a solid fit between the barrel and the receiver. If the barrel slips in too easily then the shooter should already be aware that there is not a secure fit and gravity will start doing her work immediately. Or if the barrel tenon is not the same diameter throughout the length then a teeter totter effect is set in motion. For instance if the breach end of the tenon is smaller than the shoulder end the weight of the barrel will "pull" the barrel down and barrel droop is created. Or if the breach end of the tenon is larger than the shoulder end then as the tenon is installed in the mortise the breach carves a larger hole and again a teeter totter effect is created as the smaller shoulder end of the tenon sits is a hole that is too large. This same effect would happen if the middle of the barrel tenon was enlarged.

KIDD eliminated barrel droop with the utilization of a resistance fit in this mortise and tenon joint, meaning that the KIDD barrel tenon is just slightly larger in diameter than the KIDD receiver mortise and we make absolutely certain that the tenon is the same diameter throughout the length.

Another problem area to be aware of is the proper utilization of the shoulder. If the shoulder of the barrel does not set flush against the receiver then again the support isn't there. Comparable to setting down a tall glass with a convex bottom, it wants to tilt. We make certain that the shoulder created between the .920" diameter and our tenon is precise. This requires specialty cutting tools to create a very clean step. But if done with less care there will be a ramp rather than a step between these two differing diameters. This ramp will not support the necessary weight and will prevent the shoulder of the barrel from sitting flush against the receiver.

When this barrel fitment is secure we recommend the v-block screws just need to be snug, around 10 inch pounds, which is just snug enough to keep the barrel from moving forward, but not too tight to pull the barrel out of alignment.

Depending on your receiver, if there is paint build up in the receiver mortise be sure to scrape that out. We recommend using an anti-seize compound to assist in installation. Anti-seize is readily available at automotive stores. It is best if you can get the barrel tenon started into the receiver mortise, then turn it over and tap the back of the receiver with a rubber mallet. Be sure to line the extractor slot up as you are installing the barrel. Your barrel is ready to shoot, just run two magazines through it before you really start looking at group size. Do this each time you change brands of ammunition as well. Keep the chamber clean, but don't clean the bore too much you will decrease accuracy. Depending on the ammo, clean the bore around every 500 rounds.