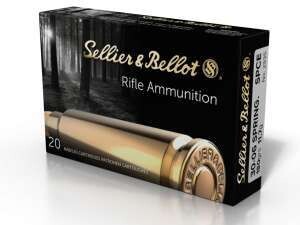 This 30-06 Spring round by Sellier & Bellot features a 150 grain SPCE (soft point cutting edge) projectile. This type of bullet has a partial jacket, but unlike the traditional soft point that it so closely resembles its lead core is not entirely locked in. This causes it to expand rather differently, where the front of the bullet mushrooms outward while keeping a large part of the shank totally intact. The type of expansion provided by an SPCE is most efficacious when hunting thicker skinned game such as hogs, and while it ought to take down a whitetail its terminal performance can be a little much for such a thinner skinned beast. It’s a great solution for target practice as well, given the clean hole it punches through a target.